Press enter to begin your search
client only

Harold Wilson’s quip that ‘a week is a long time in politics’ very aptly describes what we have seen since the mini budget was revealed on Friday 23 September. Whilst our New Chancellor has endured a tough 10 days, it is very difficult to feel too much sympathy as much of the adverse market reaction would appear to be largely self-inflicted. With the reversal of the cut to the 45% tax band they seem to be acknowledging this themselves.

Few would deny the importance of putting strong growth back into the economy but rather than being applauded for announcing a series of measures to help deliver this, the Chancellors plans have seemingly backfired sparking widespread condemnation including from the IMF. The reaction of the financial markets has unhelpfully added to existing concerns around the rapidly rising cost of living, energy bills and the wider implications over the war in Ukraine.

The Government should certainly accept some responsibility for the recent market turmoil as some of the measures outlined to rebuild the economy such as scrapping the 45% tax rate and removal of restrictions on Banker’s bonuses are hard to fathom. It would be unreasonable however to suggest the current financial difficulties are solely down to recent Government incompetence. The value of Sterling had already been falling against the dollar for some time and interest rates were already rising to stem the rise in inflation. Unfortunately, the plans outlined in the mini budget spectacularly backfired causing the pound to hit a new record low level against the dollar on Monday and on Wednesday there was an intervention by the Bank of England, primarily to support certain areas of the Government Gilts market.

The media’s reporting of a crisis can often border on being sensationalist which is not terribly helpful and you would be forgiven for thinking that all the financial woes are confined to the UK only. We therefore thought it would be helpful to take a step back and look at what has been going on in a global context and importantly how this has been affecting your investment portfolio.

Why did the Bank of England have to step into the Gilt Market?

In the UK, pension funds have a type of insurance that aims to smooth out market volatility of gilts and hedge the income that they need to provide called Liability Driven Investments (LDI). In normal circumstances, Gilts provide important dependable returns to pension funds to enable them to meet their liabilities so when the Gilt market suddenly becomes volatile, it creates a problem.

These LDI plans use complex financial instruments to manage their positions. In certain circumstances these investments need additional payments to be made by the pension scheme. With the rapid movements in gilts during the week, many pension funds were required to find additional money and the quickest and easiest asset for them to provide this was often their gilt holdings. When you suddenly have many institutions trying to sell an asset, it naturally leads to falls in value, and conversely the need for additional payments to be made.

If no intervention had been made there could have been the risk that some pension funds may have got into financial difficulty. In order to stop this downwards spiral of gilt prices and to promote stability, the Bank of England offered to buy substantial amounts of gilts on a temporary basis and the announcement caused an almost immediate rise in gilt prices.

Sterling has been falling against the US dollar for some time, but turning this upside down, the dollar has been strengthening against Sterling. In fact, due to its status as a ‘safe-haven’ currency, and the Fed’s more aggressive rate raising strategy which has resulted in more attractive shorter-term yields, the US dollar has strengthened against most major currencies over the past year, attracting global capital. It is also a major energy exporter, which adds extra support. The DXY index that tracks the dollar against six major currencies stands today at a 20-year high. As the chart below illustrates, Sterling is largely unchanged against the Euro and the Japanese Yen over the past year.

A consequence of the weak Pound is importing inflation, as around one third of household consumption in the UK is made up of imports, which are now more costly. A falling pound is not all bad news however as it does make UK goods and services cheaper overseas.

Some comments from economic pundits have suggested that Sterling is turning into an emerging market currency and that this could lead to a currency crisis. While these are headline grabbing they are also flawed.  The UK has a flexible exchange rate (it is not pegged to any other currency); its financial markets are highly established and liquid; the Bank of England operates independently of the Government; and unlike emerging economies, almost the entirety of its debt is denominated in Sterling[1].

Global stock markets have been volatile this year with major falls in many overseas markets including the US.

From an investor’s perspective, a rising US dollar provides a positive contribution to Sterling-based returns. The overseas equities that you own in your portfolio come with the currency exposure linked to those assets and therefore, a fall in Sterling has a positive effect on non-UK assets that are unhedged. This has helped to shore up portfolio returns for many because the US market is a large constituent of international stocks.

The UK equity market is down only around 3% in the past year[2], supported by large holdings in sectors such as energy and low holdings in technology, combined with the fact that a majority of earnings are from overseas, benefitting to some degree from these exchange rate movements.

Finally, Global value stocks have risen in value in both developed and emerging markets in 2022 to date helping to support portfolio values as we tilt to this investment style.

Our fixed income assets are hedged which remains sensible as this reduces their volatility and remaining unhedged (i.e., exposed to currency movements) in equity assets continues to make good sense and will support portfolio values if Sterling falls further.

Again, reading the news one might get the impression that rising inflation and interest rates in the UK is a pain inflicted on the population entirely by its Government. The reality is that rising interest rates are a global phenomenon as countries grapple with high inflation caused by a rapid growth in the money supply (quantitative easing), supply issues caused by Covid, and the price pressures on energy and food created by Russia’s war in Ukraine. The fact that the UK Government now needs to borrow more, as a consequence of the energy cost support packages and its unfunded tax cuts, is also contributing to rising yields. The chart below shows the rate of inflation, central bank interest rates, and bond yields in a number of major economies.

For the UK example above, you can see that consumer prices inflation (CPI) in the 12 months to August 2022 was 9.9% and the Bank of England base rate is currently 2.25% (rounded to 2.3%). The yield on 5-year duration government gilts 6 months ago was 1.4% but had more than tripled by September.

It is evident that inflation is universally high. Five-year bond yields are at or near 4% in all but one of these economies, and all have risen materially in the past six months. Whilst that is bad news for mortgage and other borrowers, who have benefited from an extremely low cost of borrowing for many years, it is better news for those holding cash or investing in bonds. Despite bond price falls because of yield rises, long-term investors will be better off, over time[3], from yields at 4% than at near 0%, which we saw 18 months ago. In the UK real (after inflation) yields on index linked gilts are now in positive territory for the first time since 2010. That is good news for investors as well.

A few commentators have grabbed headlines by starting to question whether the UK will be able to service its debts in the future. Yet, the UK remains a major global economy and while the debt service burden will be increasingly heavy, it issues bonds in its own currency, can print money to pay its debts and has a maturity profile with around half of its bonds maturing beyond 2030 – far longer than most major economies which reduces the short-term refinancing risks that often accompany defaults. Insurance against UK Government debt default over five years implies the risk of default is negligible at less than 0.5%[4].

As we wrote earlier in the year, rapidly increasing inflation and interest rates present particular challenges for the assets making up the defensive element of investment portfolios.

In the main defensive assets held in your portfolio, the investments you hold will be short-dated, high-quality bonds in a number of major markets such as the US, the UK and Europe. The expected return for this fund is now in the region of 4% per annum so has risen dramatically over the last year, as markets reflect the risks of higher-for-longer inflation. This means the portfolio will benefit from higher interest on its bond investments.

There is a short-term cost of transitioning to these higher yields that have led to a fall in portfolio values this year. It is also worth noting that the yield rise impact has been materially less severe in high quality, shorter-dated bonds that form the majority of exposure in our defensive assets than for longer-dated and lower quality bonds. This is shown below with the short-dated bond we use compared to a longer dated bond example. 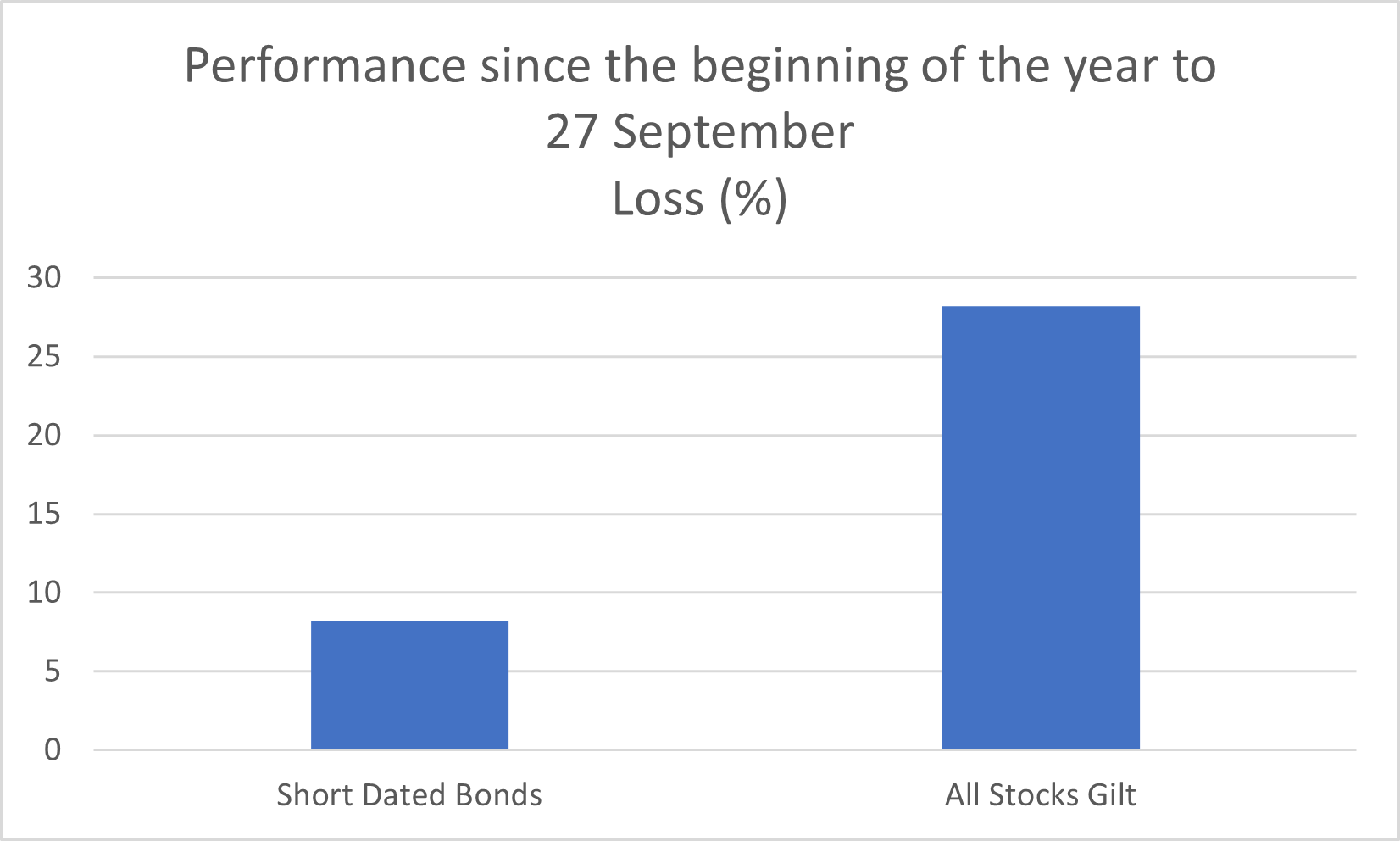 Although the performance of the short dated global fund held in our portfolios has been impacted by recent events, the fund has been protected by the short duration and high quality nature of the underlying investments. This can be seen clearly when compared to a long dated fund. The fund performance going forward should also benefit from the higher income yield which should help recover the recent losses.

Our index linked fund has been more volatile albeit with a maximum exposure of no more than 10% in portfolios. This fund was positively impacted by the Government intervention and saw some big swings in value last week.

There is no doubt that there will be uncertainty ahead, but investors who own globally diversified portfolios of equities and higher-quality shorter-dated bonds are well-positioned to weather any possible storms.

Building a robust investment portfolio and sticking with it requires fortitude and confidence in the evidence that underpins it.

We structure your portfolio with a long-term view in mind. We accept that the relationship between risk and return usually holds true. We also accept that markets are hard to beat, and that most investors aiming to pick tomorrow’s winners fail to do so. We are guided by the evidence to put in place a solution that strikes a balance between the expected upside whilst limiting the expected downside.

The future returns of markets, performance of economies and release of new information are all phenomena outside of our (and anyone else’s) control, though with sensible diversification we can mitigate the impacts of unanticipated downturns. Diversification features comprehensively throughout your portfolio. Your portfolio benefits from the exposure to thousands of stocks, across tens of countries and a wide array of sectors.

But we appreciate the news at times of turmoil can be disconcerting and your Old Mill Financial Planner is always there to talk if you want.

Performance of the Old Mill Portfolios – up to Friday 5 November