One of the frustrations of the current crisis has been that announcements of government support packages are giving headlines, but it has then taken days or even weeks for details to emerge as to how the schemes will operate in practice, and importantly: when businesses will be able to access the funds.

After the announcement of the Coronavirus Job Retention Scheme (C-JRS) back on 20 March March, HMRC has finally published clear guidance on eligibility and how employers can access the ‘Furloughed Workers Scheme’.

The headline terms haven’t changed in that, for furloughed workers that would otherwise have been laid off or made redundant, the government will reimburse up to 80% of each employee’s wage for all employment costs, up to a cap of £2,500 per month, plus employer’s National Insurance and minimum workplace pension contributions.

So, what about the detail?

This article covers the practical next steps based on the information published by HMRC on 9 April and the final changes made to the scheme on 15 April.

Since the CJRS was announced, many of the same questions have kept coming up:

No, it is ‘all or nothing’, i.e. it is effectively being laid off, and for a minimum three-week block, which can be extended

No, as above, the information available to date suggests that workers who are furloughed should not undertake any work whatsoever for the company. The scheme is designed to protect workers who would otherwise be made redundant, if workers were able to still perform duties for the company, there would be scope for abuse of the scheme

Salaried company directors are eligible to be furloughed. Like employees, directors are not permitted to carry out their normal work whilst on furlough (i.e. revenue generating work), but because directors have statutory duties under Company Law, they may continue to do this, provided ‘they do no more than would be judged reasonably necessary’

Yes and no. The grant will be backdated to 1 March, but HMRC are not yet set-up to be able to make the payments. The government has promised the first payments will be made toward the end of April

It appears that employment at the end of February is the key date, and the aim of the CJRS is to reduce the numbers of workers made redundant. It may therefore be possible to reinstate and then furlough.

The CJRS incentivises companies to keep employees on the payroll rather than laying them off; the idea being that once business returns to normal, they can be re-activated which will be vital for recovery of the economy.

To access the government support, businesses will need to classify employees as a ‘Furloughed Worker’. Whilst this term is well-known in America, it has not previously been a part of the UK business landscape.  A ‘Furlough’ is in effect, a temporary lay-off, but it is, to all intents and purposes, equivalent to a lay-off, which means the Furloughed Workers should not undertake any work at all whilst laid-off, although they are allowed to undertake training.  Basically, they need to behave as if they no longer work for the business; except that they have the potential to come back and resume continuous service.  This may be inconvenient to businesses, but is an understandable protection to counter abuse of the scheme.  The government only wants to be funding the pay of people who would genuinely be made redundant, but for the CJRS.

The scheme does extend to employees who are ‘shielding’ in line with public health guidance, or required to stay at home due to a member of their household shielding, or employees unable to work due to caring responsibilities including childcare (due to closure of schools and nurseries) and vulnerable relatives in their household. In these cases, employees may request to be furloughed and would be eligible for the scheme, but it is up to the employer to decide whether to furlough the worker.

Provided these conditions are met, employers can claim a grant of up to 80% of each employee’s wage for all employment costs, up to a cap of £2,500 per month, plus employer’s National Insurance and minimum workplace pension contributions.

The employee will remain ‘employed’ for the duration of the furlough, and the employer can choose to fund the difference between the government payment and their usual salary, i.e. the 20% shortfall, or the amount over £2,500, but this isn’t compulsory.

The 80% / £2,500 is gross pay therefore PAYE and NIC is still applicable and deductions are made.

Businesses will submit information to HMRC about the employees that have been furloughed and their earnings through a new online portal.  HMRC has announced that this portal will be available by 20 April.

There will therefore be initial cash flow issues in paying the furloughed individuals who will have received their March payroll but the grant will only arrive a month in arrears.  In the short-term therefore, it may be necessary to source bank funding or the Coronavirus Business Interruption Loan.

It was initially announced that the CJRS will initially run for three months from 1 March 2020 but that has now been extended until the end of June.

The scheme is available for workers who were in employment on 19 March 2020 (which is a late change to the original qualifying date of 28 February 2020) and the last payroll submission prior to 19 March will form the basis of the calculation; or for employees whose pay varies month-by-month, an averaging calculation based on the 2019/20 tax year may be used.

CJRS and furlough doesn’t override employment law.  All of the usual rules continue to apply, including the need for fairness, consultation and non-discrimination.

Employers will need to establish a business need for the furlough, although in the current crisis that should be relatively straightforward.

Employees need to be formally notified of their conversion to furlough status, and this confirmed in writing.  We recommend taking legal advice from your business’ employment lawyers before placing anyone on furlough status.

For employees already notified that their role is considered ‘at risk’ or already given notice, employers should be discussing the CJRS option with them as part of any consultation process and agree to either carry on with the redundancy process, or agree to introduce the CJRS furlough as an alternative.

It may become necessary to move from furlough to redundancy, if it becomes clear that part of a business will be irrecoverable for example, or if the business in its entirety has to close.  In this case, the furlough payments would cease from the CJRS.  Again, legal advice will be critical at that stage.

All UK businesses are stated as being eligible with no restrictions on size or number of employees.

Employees are eligible if they were employed in the business on 19 March 2020.

Preparing for the CJRS 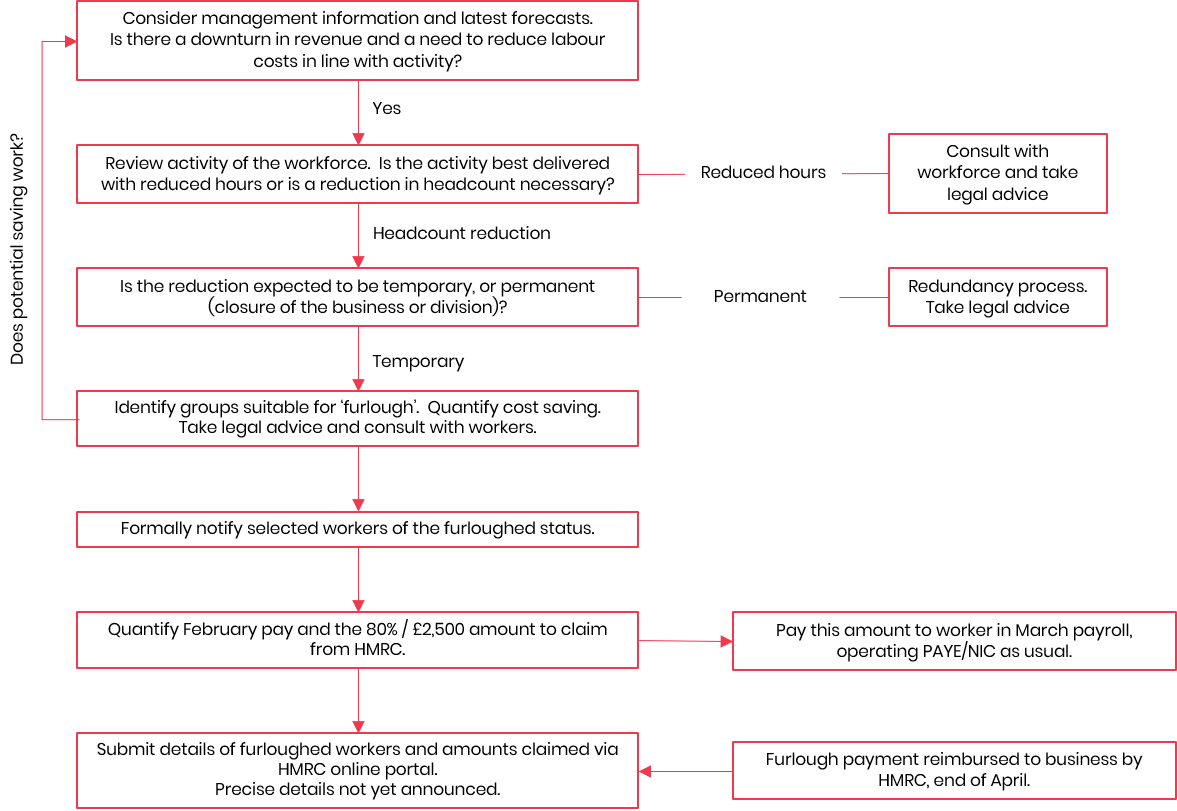 Information required for your claim

To make the claim via the HMRC, the business must have an ePAYE reference.  If you do not have one you will need to apply and it may take some days for this to come through.  We therefore recommend checking and applying if necessary, as soon as possible.