Accessing your pension over 55: A guide & the tax implications

The coronavirus lockdown has had wide ranging effects on everyone and if you’re approaching retirement you may well be thinking about your options over the coming months.

For those over the age of 55 one of the options available to you is accessing your pension. Given these uncertain times, you may be considering doing this to increase your disposable income, ease any financial pressures or even to retire earlier than you originally planned. The rules allow you to take out as much as you want from your fund, with 25% being tax-free and the remaining 75% is subject to your marginal rate of income tax.

Pension payments on the increase  – The stats

According to HMRC, record numbers of people have been taking money out of their pensions since the beginning of the year. 348,000 people made a withdrawal between January and March, a 23% increase from 284,000 in the same quarter in 2019. The total value of the payments was £2.46 billion, the highest amount recorded for that period since pension freedoms began in 2015.

The average withdrawal in this period fell slightly to £7,100, down from £7,300 in Q1 2019. The statistics have shown average withdrawal amounts consistently decreasing since reporting became mandatory in Q2 2016 with peaks in Q2 of every year, in line with the start of the tax year. 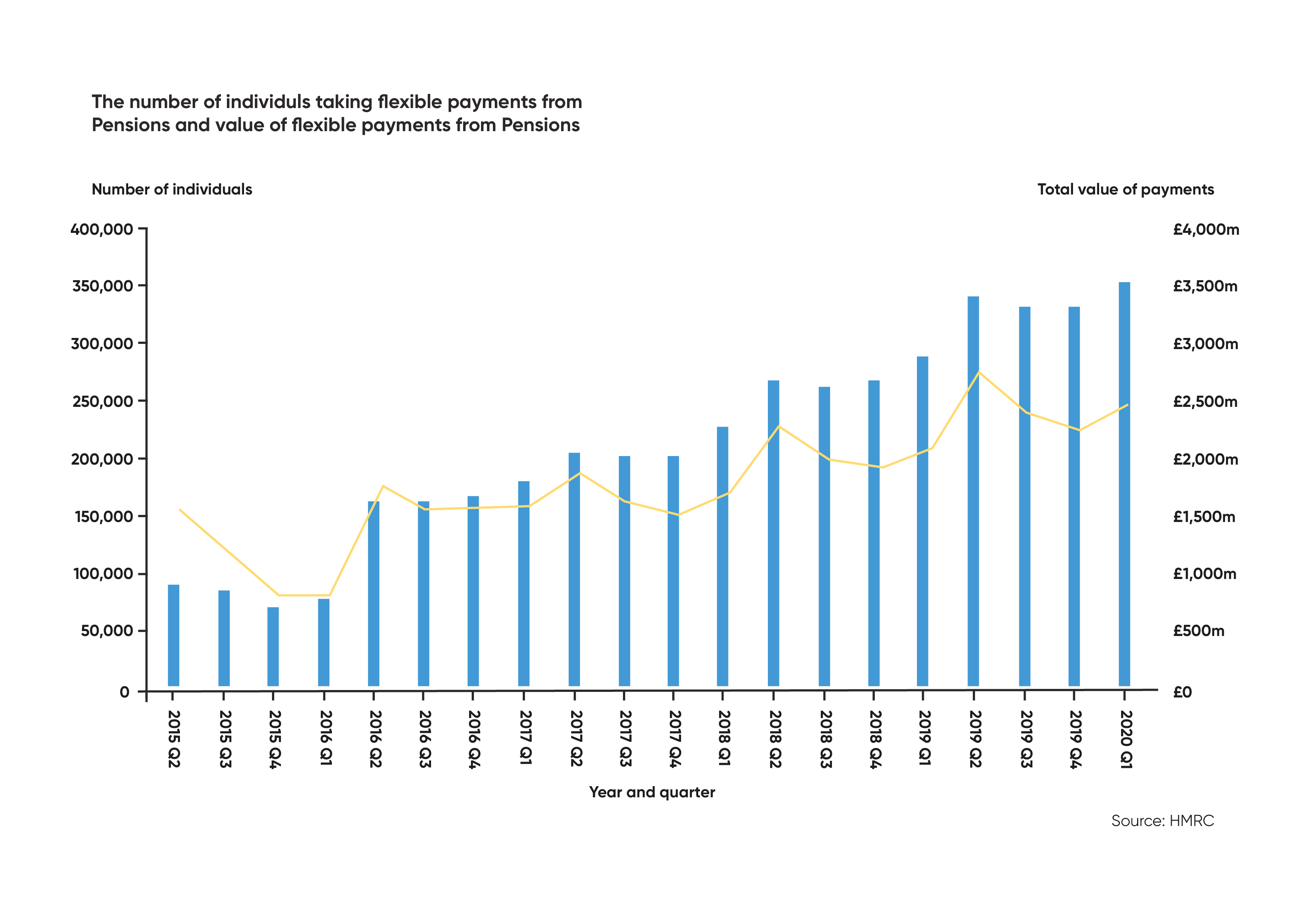 However, just because the pension freedoms are there doesn’t necessarily mean that taking advantage of them is always the right course of action. Here are some key considerations:

Unlocking / Releasing your pension early: Should you do it?

The main purpose of a pension is to give you sufficient money to live off throughout your retirement. Whatever you take out now will influence what you have to live off in later life. That’s why it’s a good idea to try and leave as much as you can in your pension so that it has the opportunity to benefit from future market rises.

Most people take the whole of their 25% tax-free lump sum when they first access their pension however you can take out money from your pension in stages, in line with what you actually need. This way you have a smaller tax-free lump sum at the outset but further tax-free entitlements throughout your retirement. It’s important to seek advice as to what is best for your personal circumstances.

Obtaining an up to date cash flow forecast that includes all of your investible assets can provide clarity on how long your wealth is likely to last in a number of different scenarios and help you to make an informed decision on how best to structure the withdrawal of benefits from your pension fund.

What is Later Life Planning & do I need it?

Later life planning is about much more than planning for care and how best to fund it, although that’s a very large element of it.

Are there any other savings you can use before you tap into your pension?

Accessing your pension is a major step. Make sure you’ve explored all your other options first. For example, cash savings or if you have a business, any Government grants that you may be eligible for.

Remember that if you have a defined contribution pension, a significant proportion of it will probably have been invested in stocks and shares, which may have taken a hit in recent months. So, if you access cash from your pension at the moment by selling stocks and shares, that money won’t have the opportunity to regain its value once the stock markets recover.

"If you access cash from your pension at the moment by selling stocks and shares, that money won’t have the opportunity to regain its value once the stock markets recover."

It’s worth being aware that by taking a large amount out of your pension in a particular tax year you could be tipping yourself into a higher tax bracket, meaning you will pay more tax than you would have done if you’d taken smaller amounts over a longer time.

Another consideration is that HMRC will ask your pension provider to deduct income tax when you take an income from your pension pot for the first time (not counting your tax-free lump sum). They will assume that what you take the first month is what you will take every month, which could again push you into the higher bracket. If you haven’t been taking that every month and are a basic rate taxpayer, you can claim the extra tax back.

Paying into your pension in the future

When drawing pension benefits for the first time, it’s important to take advice to avoid falling foul of some of the complex tax rules. For example, you may still be working but need to access some funds from your pension fund to supplement your earnings temporarily. If the drawing of these benefits is not structured properly, you may find that you are restricted to how much you and/or your employer can contribute in the future if you are still paying into your fund.

The standard maximum that can be paid into pension funds is £40,000 per annum but as soon as you draw any taxable income from your fund, something called the  Money Purchase Annual Allowance is triggered and the maximum pension contribution limit will drop to £4,000 a year.

Is this a temporary step or more permanent?

While some people may just need a small payment to tide them over until businesses re-open, you may be thinking of a more permanent transition into retirement. If you’re considering accessing your pension or want to talk about your retirement plans, do get in touch with us to discuss the implications or find out more about our later life planning here.

Things to look out for in tax returns as 100,000 people issued with penalties