Until pension freedoms were introduced in April 2015, most people would secure their retirement income by purchasing a lifetime annuity with the funds they had accumulated in their pension funds. With annuity rates on the increase, we look at the pros and cons of taking out an annuity.

A lifetime annuity pays a guaranteed income for life. The amount of income you receive is dependent on a number of factors: your age and health, the size of your pension fund, economic factors, the type of annuity and the options you select. The main downside to an annuity is once you have chosen your options it is then not usually possible to change them. For example, if you choose an income payable only to yourself, but then subsequently remarry, it is not possible to go back and add a spouse’s pension to be paid once you die.

Pension freedoms allowed much greater flexibility in how you are able to access the money held in your pension fund and took away the compulsion for most people to buy an annuity once you reached the age of 75. Today, the majority of people will keep their money in an ‘income drawdown’ plan which allows the money to remain invested and drawn upon as required.

One of the main reasons that annuities became unpopular was due to the low levels of guaranteed income they were able to generate on the back of falling gilt yields. The chart below is based on a pension payable only to yourself from a pension pot of £100,000 and this shows the income has reduced from almost £8,000 per annum in 2008 to about £5,000 since 2016. A fall of about a third.

As a result of gilt yields rising rapidly from the beginning of this year, annuity income has risen over 30%. This means some investors who are cautious of investment volatility and want the security of a guaranteed income may want to consider annuities again in light of the rise. 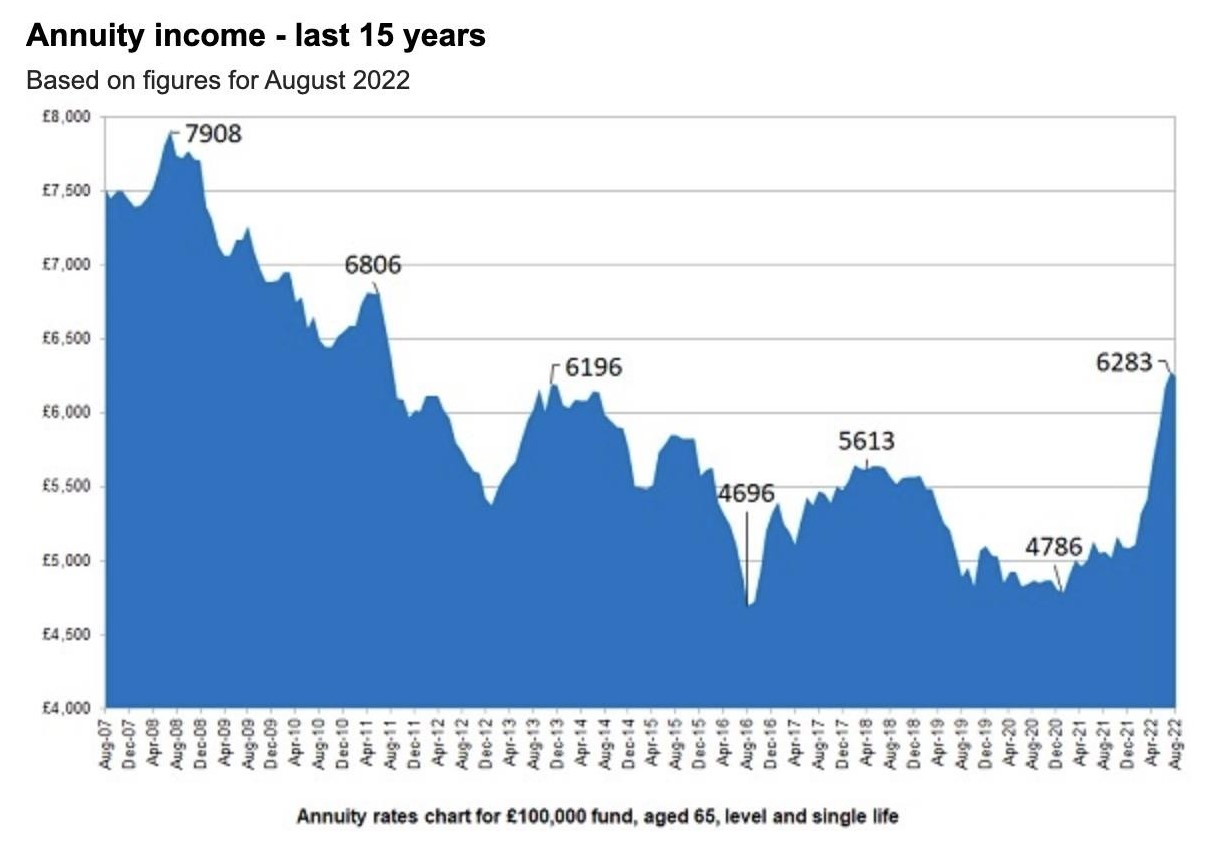 The annuity choices you make at outset with an annuity affect the amount you receive. The table above is based on a 65 year old payable throughout their lifetime only. If you are married and want your spouse to continue receiving the income after you die at the same level, the starting income will reduce at the same age from £6,283 to £5,361 (same source). For those with health conditions it may be possible to get a higher annuity rate through an impaired life annuity.

One of the most notable benefits of leaving pension funds invested is the ability to pass on the funds to beneficiaries Inheritance Tax free on death. While there are now more flexible plans, a traditional annuity would pay you an income through your lifetime but on death, the plan would end without value. If you had a long life and were able to draw the annuity over many years, this could prove to be a worthwhile option for some. However, if this is not the case, the annuity option could prove to be poor value. For example, if you are able to secure annuity income equivalent to 5% pa of the pension fund, you will need to receive these fixed payments for 20 years to simply recoup the amount held in your fund.

Your financial planner will be able to discuss your individual circumstances and recommend the course of action that is right for you.